According to the Intergovernmental Panel on Climate Change, climate change refers to a change in the state of the climate that can be identified by changes in the mean and/or the variability of its properties, and that persists for an extended period, typically decades or longer. It refers to any change in climate over time, whether due to natural variability or as a result of human activity. Climate change is a pervasive factor that has the potential to affect nearly every wildlife species and habitat. Climate change was not addressed in the original 2006 Comprehensive Wildlife Conservation Strategy, and is therefore considered in greater detail in the SWAP to address its broad geographic effects and interactions with other stressors.

While individual wildlife managers are unable to slow or delay the causes and effects of global climate change, they may be able to manage for climate-related stressors and benefits to wildlife populations and habitats at the local level.

The SWAP makes no attempt to create or direct policy for mitigating drivers of global climate change, but focuses on the current state of knowledge regarding projected climate-related changes to New Mexico’s wildlife habitats, and their implications for the state’s wildlife populations. Resource management practices to improve the resistance and resilience of wildlife populations and habitats to climate change are included within the SWAP’s Conservation Actions.

Temperatures have been increasing in New Mexico, with larger increases observed in southwestern, central, and northwestern New Mexico. Annual snowpack has been declining and peak stream flows are occurring earlier than they did historically. Projected changes include: higher temperatures, more severe and persistent regional droughts, declining precipitation events and reduced snowfall, and individual precipitation events may become more intense. 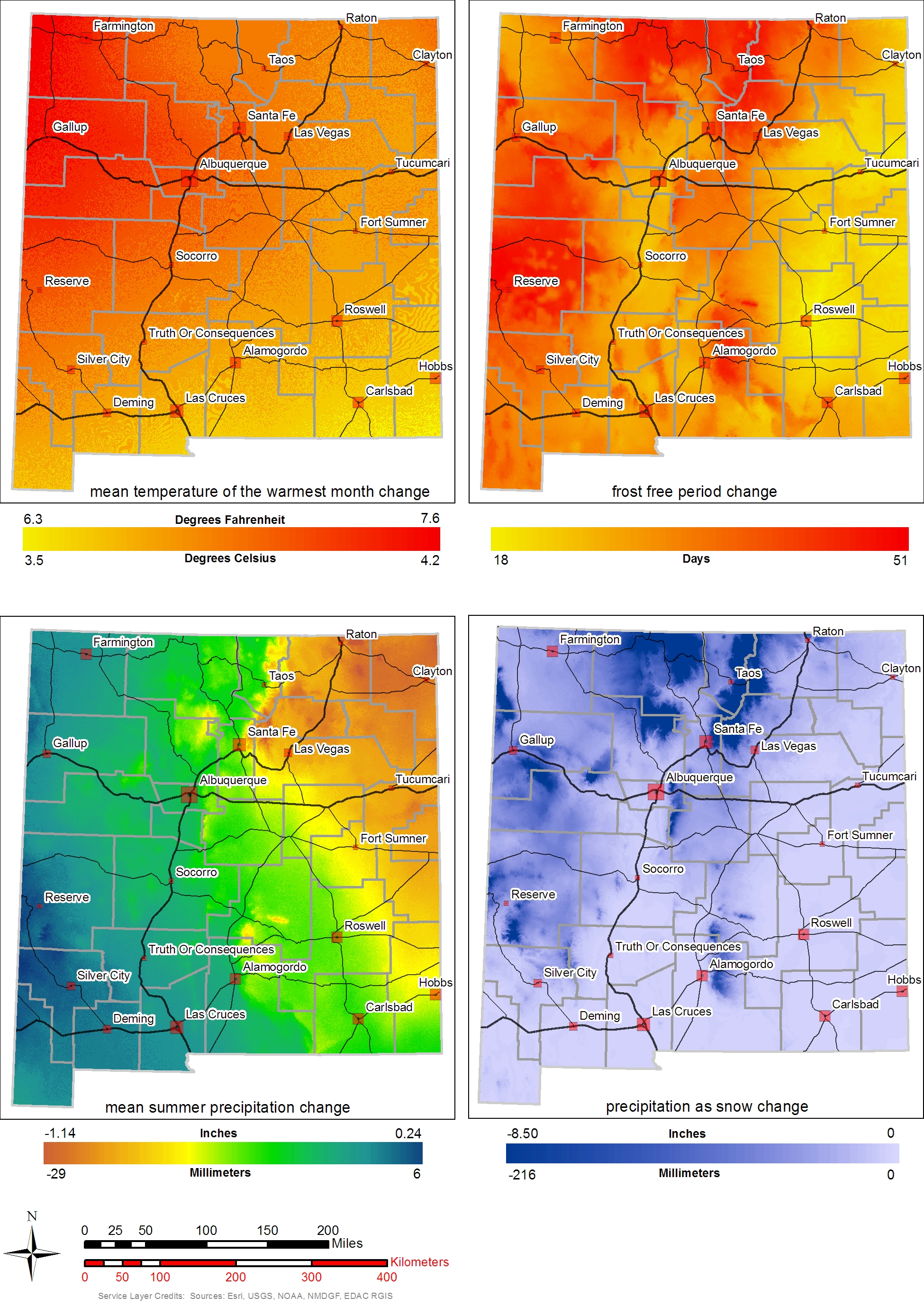 Water availability is the primary factor limiting plant growth in the southwestern United States. As temperatures rise, rates of evapotranspiration (water losses from both plants and land surfaces to the atmosphere), and associated limitations on plant growth, increase. Boundaries between terrestrial habitat types have already shifted. In northern New Mexico, there are sites where piñon-juniper has replaced ponderosa pine following severe drought and ponderosa pine mortality. Additionally, creosote and mesquite shrubs have spread into grasslands in central and southern New Mexico. In the future, grasslands may decline significantly, especially in central New Mexico. Shrublands may increase in some areas, including continued expansion into grassland habitats. Alpine habitats are likely to shrink as mid- and lower-elevation forests and woodlands move upslope. Tree stress and mortality, along with associated insect and disease outbreaks and wildfire, are likely to increase as evapotranspiration rates and drought length and severity increase. Rising temperatures may enhance survival of bark beetles, to which species such as piñon pines are particularly susceptible. Many forested and woodland areas may ultimately be converted to grass and shrub-dominated communities, in some cases facilitated by high severity wildfires.

Aquatic and riparian habitats are also likely to be impacted by a changing climate. Reduction in stream flow associated with reduced snow pack and increased spring-summer drying trends, along with potential mismatching in timing between earlier spring runoff and seed dispersal, are likely to reduce the abundance of native riparian vegetation. These trends favor more drought-tolerant woody species, such as non-native tamarisk and Russian olive, over native cottonwoods and willows. The water table and stream flows may be further lowered by increased evapotranspiration. Availability of high-quality perennial cold and warm water stream habitat, suitable for associated aquatic species, is likely to decline. As stream flows decline, water will warm more quickly and may increase thermal stress, create migration barriers, fragment habitat, and reduce reproductive success of cold water-adapted, native species. Non-native aquatic species and some warm water species may be favored by higher water temperatures in streams, lakes, and reservoirs. Warm waters in particular may be susceptible to increases in salinity and algal growth, with impacts on available oxygen levels and local fish populations. Wetlands are threatened by drought and are sensitive to climate fluctuations. Many wetlands may ultimately transition from permanent to ephemeral aquatic habitats. Some current ephemeral wetlands and catchments, including playas, may disappear. Alpine wetlands may be especially vulnerable to projected shifts in climate.

Climate change presents a substantial threat to the conservation of wildlife diversity. Climate-related change in extinction risk varies by species, taxonomic group, and region, and species that are already at risk may become increasingly vulnerable. Species in mountainous regions and in wetland, riparian, and aquatic habitats, as well as species that are specialized, narrowly-distributed, or have limited movement capabilities, are likely to be particularly vulnerable to the effects of climate change. As winter temperatures warm, cold-blooded organisms, such as fish, reptiles, amphibians, and invertebrates, may extend their active seasons and require additional energy during winter months, when food resources are limited. Migratory species may be impacted by climate-driven mismatches between life history events and resource availability. Detailed information is not available for all SGCN, but multiple SGCN are likely to experience declines in their geographic distributions by the end of the century. For example, the Arizona treefrog is vulnerable to a variety of climate change-related effects, including a reduction in terrestrial and breeding habitat and high severity wildfire. Another SGCN, the black-tailed prairie dog, is associated with grassland habitat types that may decline under future climate scenarios.

Climate change can aggravate current threats and produce new impacts that influence the success of species conservation programs. Information on vulnerability to climate change can be used to improve management actions for both individual species and groups of species with similar ecological requirements. General recommendations for coping with climate change include: 1) increase the robustness of SGCN populations by reducing pressures from factors other than climate change; 2) enhance the ability of natural systems to resist immediate effects of climate change; 3) use longer-term strategies that enhance species and ecosystem resilience to climate-related stressors (e.g., conservation of genetic diversity); 4) accommodate future native species range shifts by maintaining connectivity between protected areas and suitable habitats; 5) consider the timing of species management actions and perform them when conditions are most favorable for native species; 6) prepare for conservation of SGCN to necessitate long-term, intensified efforts, innovative approaches, and flexibility that includes incorporation of new management goals and the expectation of changing habitat conditions; and 7) implement monitoring programs to assess population trends and evaluate success of climate-related management actions.

Focusing on habitat components that are likely to decline as the climate changes and addressing primary limiting factors for a given species (e.g., dispersal ability, sensitivity to extreme events) may help managers narrow their range of management options. Examples of potential actions for a SGCN such as the Arizona treefrog include: 1) reducing the risk of stand-replacing wildfire through prescribed fires and thinning treatments; 2) buffering against desiccation by promoting leaf litter accumulation; 3) maintaining breeding habitats through wetland and stream restoration and protection of occupied habitats most resilient to water flow declines; and 4) controlling non-native amphibians to enhance treefrog populations. Potential actions for a SGCN such as the black-tailed prairie dog include: 1) improving open grassland habitats through prescribed fire, woody vegetation removal, and sustainable range management practices; 2) increasing resistance to catastrophic population losses by prioritizing prairie dog conservation in less disturbed areas and providing vaccinations, or applying insecticides at burrows, to prevent disease (plague) outbreaks; and 3) enhancing landscape-level population resilience by maintaining genetic diversity and ability to disperse to new habitats.